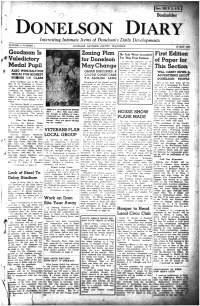 From "Donelson, Tennessee: Its History and Landmarks" © 1968 by Leona Taylor Aiken:

"The first edition of the old Diary published May 16, 1946 had been set by hand by John Oliver, Lou Clapper and several friends....

"John Oliver of Springfield, Ohio and Lou Clapper of St. Louis, Missouri were buddies in the Navy and had planned at the end of World War II to set up a paper somewhere in the South for both were experienced newspapermen.

"While visiting in Donelson in 1946, they were impressed with the progressive look of the place which was growing out of the village class into a town. A new Crescent theater was opening and many Vultee workers were seeking new homes here.

"It was decided that Oliver would handle the mechanical part of the paper, and Clapper would do the editing. They found a building "on the cliff" (MacFarland building) across from the Donelson theater, and they set up the first newspaper for Donelson and the surrounding community in the eastern part of Davidson County.

"On June 30, 1949 Oliver and Clapper dissolved their partnership, Oliver buying out Clapper's share of the paper. On November 9, 1950 the Diary moved into a new location next door to the old building, in the basement of the Mefford building, to the rear of the Firepops Esso station.

"In 1954 Harold C. Wallace formed the Donelson Publishing Company and bought the paper for his daughter and son-in-law, Mr. and Mrs. John Burns, who published it for one year.

"They in turn sold it to a Mr. Barr of California who had it only six months. Then Houston Roberts and Jack Dykes bought the paper and published it from 1955 to 1957. Oliver took it back for a while.

"On June 17, 1959 the Donelson Newspaper Printing Corporation was formed by Robert Freeman, Dick Freeman and Robert Flohr to purchase the paper from Oliver. They sold it to the Community Newspapers, Inc., January 1960.

"Both papers won many awards. One was a national award for a 'first in advertising for a weekly newspaper of its size' for the section showing a family Christmas Shopping through the stores in the community.

"The offices of the News-Diary which had been upstairs in the post office building on the Lebanon Road near the overpass, were moved downstairs February 1966 right next door to the post office."

"Louis S. Clapper and John L. Oliver are publishing a new weekly at Donelson, called 'The Diary' which is chuck full of Donelson News ..."

"...Merchants of Donelson, realizing their community was rapidly growing out of the village class and into a town, have in the majority long felt a publication of some type was needed to best advertise their businesses and promote the general welfare of the surrounding community. This edition and the ensuing ones it is hoped will fulfill that need.

"The publishers of the DIARY are newspapermen and women with proven records in their field behind them. Following service in the armed forces of the United States since World War II started, each has been recently discharged, moved to Donelson, and together they have opened the printing plant and newspaper office now located in the MacFarland Building, in the East end of Donelson on Lebanon Road, and are open for business for commercial printing as well as publication of the DIARY.

"Editing the DIARY will be Louis S. Clapper, more recently of St. Louis, a graduate of the University of Missouri School of Journalism, and prior to his entrance into the U. S. Navy, a sports and news writer for the Kansas City Journal-Post. Mr. Clapper was reared in a small town on the Iowa-Missouri line, received much practical experience on small newspapers in towns near his home before entering college and later the city newspaper field He is single and lives on Cumberland Circle. During War II [sic] he spent many months in the Pacific and Aleutian theatres as damage control officer aboard the U. S. S. Honolulu. He was discharged from the service last winter.

"In charge of the mechanical department of the DIARY will be John L. Oliver, of Joplin, Missouri. Prior to serving with the U. S. Navy Seabee’s throughout the war, he worked on both rural and city newspapers throughout the middle-west and south. More recently he was employed by a New York construction company as superintendant and purchasing agent and at one time was located in Tennessee during the construction of Camp Campbell, at Clarksville, where he first learned to like this section of the South. Mr. Oliver’s tour of duty in the war led from New Guinea to the Phillippines, to Okinawa and finally with the Marines into China. He was discharged in March of this year. Mr. Oliver is a widower and lives on Cumberland Circle, where he will be joined by his 6-year-old son who is now completing his first year of school in Lebanon, Missouri.

"The DIARY intends to carry as its news only such items as pertains to this immediate section of Davidson County. Its circulation will cover the approximately 3,500 homes in town and rural communities that shop and do their buying in Donelson stores. It will be sent free of charge to each box holder on the mail routes for the coming two months or until such time as the readers feel they are liking and want such a paper to come regularly into their homes as the DIARY hopes to be. A yearly subscription rate will be set at that time.

"The advertising columns of the DIARY will be open to all merchants in Donelson, but will not carry any outside advertising that will conflict in any way with the merchandise offered by the local stores...."